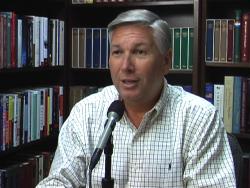 It’s tough enough for a small business to succeed when it faces competition in the open market. It’s even tougher when government puts up roadblocks in the form of high taxes or excessive regulation. Gregg Thompson, N.C. state director of the National Federation of Independent Business, discussed regulatory concerns with Mitch Kokai for Carolina Journal Radio. (Click here to find a station near you or to learn about the weekly CJ Radio podcast.)

Kokai: You talk to small business owners across North Carolina. Just how big a deal is overregulation?

Kokai: NFIB, as you just alluded to, has a regulation campaign. Tell us a little bit about that.

Thompson: Yes. We started back last spring with a campaign called, or a coalition in nine states, called Small Businesses for Sensible Regulation. And it is a coalition trying to bring light to, or put a face on, the regulation and how it is affecting small business owners across the nation, but particularly in these states, to let elected officials, the congressmen, and local and state elected officials know exactly how it is affecting the small business owner on a day-to-day basis.

Kokai: And that’s an important thing, isn’t it? Because you could hear regulation and think, “Well, you know, these businesses, they can take care of it.” But if you don’t know how it’s affecting someone individually, you might not see what kind of damage it causes.

Thompson: That’s right. And we’ve held events in all the states. We’ve had events here in Charlotte, in Greensboro, in Wilmington, in Asheville. We’re trying to make sure that the elected officials know how much of an impact that it’s really having on the small business owner. First of all, 92 percent of business in North Carolina is small business. Sixty-seven percent of all newly created jobs in North Carolina are created by small business. … But get the government off our backs. Let us do our jobs. We can create jobs if the government will get off our backs. We’re looking at over 4,200 new regulations in the pipeline to be implemented from the federal government.

Thompson: A lot of them are environmental regulations, and let me say that NFIB is not anti-environment. We want clean water. We want safe health standards for restaurants and the obvious environmental and health standards. But the federal government wants to go above and beyond. For some of our small business owners who are in the manufacturing business or whatever, they may have a certain type of chemical release into the water streams. And they’re really trying to increase the restrictions on that when it’s not needed. It’s not harmful. It’s been the same way for years.

Another example is union regulations requiring all businesses to post certain things about unions, union rights for the workers. And we were able, the coalition and the NFIB, to get that stopped before Christmas last year, before 2012, and the president even agreed with us on that. So we got that taken care of.

Kokai: You made an important point. Let’s circle back to that. And that is this issue of when small business owners talk about overregulation, they’re not saying, “Let’s get rid of all the regulations.”

Kokai: They’re just saying, “Let’s get rid of the ones that don’t do anything more than what’s already being done that’s needed.”

Thompson: One of our small business members at a roundtable — I think it was in Roanoke Rapids — had a convenience store. And he was telling us he served food in the convenience store, and he had been visited in a 12-month period by both state and federal … regulators 21 times in 12 months.

Small business owners cannot take the time away from their businesses to go through what they have to to meet with these regulators, which a lot of them are redundant. He ended up having to close his business. And it wasn’t anything harmful to the public. It was just regulation that was going to cost him so much money to change, that he had to make up the difference, and he ended up laying off two people because of the overregulation.

Kokai: What would be a more appropriate way to address regulation? As we said, you’re not saying, “Get rid of all regulations.”

Kokai: But what’s the best way to move forward with sort of a sensible regulation scheme?

Thompson: Before any regulation is implemented or even considered, we’ve got to have some — we’re certainly not saying add more bureaucracy to the system — but just some common sense in looking at what this regulation is going to do to this small business. How is this going to affect this small business? How’s it going to affect their bottom line? Because these are the job creators of our society. There are just so many regulations that they’ve got to approach it in a common sense way. And again, I want to stress that we’re not against regulations; it’s the number of regulations and the excessive regulations.