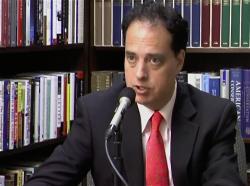 The State Board of Elections has taken its first steps to respond to a recent U.S. Supreme Court ruling dealing with taxpayer-financed election campaigns. The board told Chapel Hill it could not use “matching funds” in its taxpayer financing program, dubbed voter-owned elections. Daren Bakst, John Locke Foundation director of legal and regulatory studies, discussed the issue with Donna Martinez for Carolina Journal Radio. (Click here to find a station near you or to learn about the weekly CJ Radio podcast.)

Martinez: Why is the Board of Elections focusing on Chapel Hill, and what did they tell the town to do?

So that chills your speech, if you’re a candidate. “Well, I can exercise my free-speech rights by spending money, but when I do so, I also help my opponent.” And, as a result, that’s not really a choice candidates want to make, and that chills their speech, and that was found to be unconstitutional.

Martinez: In the Arizona case.

Bakst: Right — the Arizona case. And the same system applies in Chapel Hill. There are some minor differences, but really no significant differences between the two programs. It basically works the same way. It was very clear that the rescue fund component of their program is unconstitutional, and the Board of Elections agreed with that.

Martinez: So the board told Chapel Hill they can no longer do this?

Bakst: They can no longer do the rescue fund component, which is important because if you simply have public financing of elections, most candidates don’t want just to participate in public financing because they’ll feel like they’re going to have less money than their opponent might. There’s at least a fear of that. The way the rescue funds [are] designed is to try to somehow equalize the funding, or make it more appealing to candidates. By getting rid of that rescue fund component, it makes it less appealing.

Martinez: Does that leave the Chapel Hill public financing program — the other part of it —still in place?

Bakst: It is still in place. Now whether or not if it went to court, whether or not it should still remain in place, is a different question. It might be. And I would clarify that the Supreme Court has always said — well, not always, but since the ’70s has said — that public financing of elections is constitutional as long as it’s voluntary. So if I’m a candidate, and I voluntarily decide that I’m not going to take private contributions, and I’ll just take public dollars, that’s fine. There’s nothing unconstitutional with that.

Martinez: We see that at the presidential level.

Bakst: Right. We see that at the presidential level. That is constitutional. So a lot of the proponents of these kinds of what are called “clean elections” — that’s what the whole system is called — argue that, “Oh, this recent Supreme Court case, it’s not that big of a deal because it says that public financing is constitutional.” Well, that’s not news. We already knew that for over 40 years. So the Court already said that. It’s nothing new.

But what they did say was that you cannot punish a candidate for not participating in this public financing system. And that’s what these “clean election” systems do, and in particular, these rescue funds do to candidates — and not only candidates, but also independent groups that are spending money to support a candidate. If I’m an independent group or organization, and I want to support Candidate A that happens not to be taking public dollars, I can wind up triggering these rescue funds inadvertently because I am supporting this candidate that’s not taking the taxpayer dollars.

Martinez: It sounds as if the more money you raise privately, then, oddly enough, it penalizes you, at least to a certain degree.

Bakst: Oh, it does. And what happens is, you will decide it’s not worth raising any more money. And as a result, if you don’t have money, you can’t exercise your free-speech rights, and that’s why the Supreme Court found the Arizona program to be unconstitutional. The Chapel Hill program is identical. The problems that the Supreme Court had with the Arizona program would apply to the Chapel Hill program, and it was clear, and the Board of Elections agreed. Then, of course, North Carolina has other statewide taxpayer financing programs.

Martinez: And let’s talk about that in a moment. But on the Chapel Hill issue, Chapel Hill was given legislative authority to be the pilot program for a locality.

Martinez: Right. But supporters of that type of program, their intent all along was to try to expand that to other localities. Based on what has taken place now, the board telling Chapel Hill, “No, you can’t do the rescue funds component,” do you anticipate that this program will continue to expand?

Bakst: Short term, no. I mean, the only way they’re going to be able to expand is to somehow give money directly — they’re going to have to be very creative, let’s just say that. And it likely will mean larger sums of money to candidates that are taking public financing, that are taking public dollars. And I don’t know that taxpayers are going to like that idea — giving bigger sums of money to candidates that are participating in these programs.

Martinez: And this General Assembly, now with the Republicans in control, I think [it is] fair to say that it’s probably less friendly to this type of public financing program.

Bakst: Right. Now if things change politically, it’s possible that they could continue to have public financing and just take more taxpayer dollars and just give you — instead of $150,000 to run for a particular office; I’m just making that [number] up — they’ll give $500,000 since there’s no more rescue funds. They might do that. I mean, it’s possible that could be the result, which, in some ways, you could argue is worse. But the truth of the matter is, at least that doesn’t violate the 1st Amendment, whereas the rescue funds [component] does.

Martinez: Chapel Hill is not the only entity that does this. We have races, as you mentioned, that are involved in a public financing program. Which statewide races?

Bakst: Appellate court judges, so Court of Appeals and Supreme Court justices. And we have it for three Council of State races — insurance, public instruction, and auditor. But those programs are absolutely unconstitutional. I mean, they’re identical, basically, to the Arizona program. So certainly the rescue funds component is unconstitutional there. And, hopefully, the legislature will take action right away to just get rid of at least the rescue fund components. And even if they don’t, the state Board of Elections, just like they did with Chapel Hill, should not be enforcing or administering in any way the rescue fund components of those financing systems.

Martinez: Daren, I wanted to talk to you a little bit about the appellate judge situation. Aside from the issue of the taxpayer financing, you have been writing and blogging about a particular idea that maybe there would be no more elections of appellate judges.

Bakst: Yes, there’s certainly a proposal out there floating around, that instead of electing judges like we do now, there would be appointments. But the appointments wouldn’t work the way you think, where the governor might appoint somebody and then the Senate might confirm that appointment.

No, instead you’d have a special little nominating commission made up of representatives of special-interest groups who would come up with candidates — like two candidates or so — for the governor, who would have to choose one of them and be required to nominate, to appoint one of those people. So the problem is, it’s trying to get rid of politics in the judicial races, but instead what you’re doing is you’re actually making it worse by having special-interest groups decide who the potential judges are going to be.

Folwell wants Cooper to give local governments a break