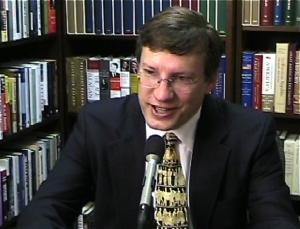 Some people equate the concept of “clean elections” with taxpayer funding of election campaigns. That equation is wrong, according to Bradley Smith, professor of law at Capital University, chairman of the Center for Competitive Politics, and former chairman of the Federal Election Commission. Smith discussed taxpayer-funded election campaigns with Mitch Kokai for Carolina Journal Radio. (Click here to find a station near you or to learn about the weekly CJ Radio podcast.)

Kokai: North Carolina obviously has a history with this idea of what is called here “voter-owned elections,” or the idea of cleaning up elections by having taxpayers pay for some of these campaigns. Is that a good idea?

Smith: I don’t think it is. I think the fact that it is not a good idea can be illustrated by the fact that the people supporting it will not call it what it is. That is, they will never go around and say, “Are you in favor of taxpayer funding of political campaigns?” Instead they call it “clean elections,” as if somebody is going to be opposed to clean elections. Or they call it “voter-owned elections,” an odd term that I don’t know quite what it means. The elections are (not) voter-owned. Nor does it have to do with the elections; it has to do with campaigns. They are talking about taking tax dollars and using them to fund candidates that you disagree with so they can run negative ads. They are using it so they can drop balloons at the state convention or whatever they might want to do. That to me is campaigning, not elections, and I’m not sure that it has much to do with clean government.

Kokai: So why do people like this idea so much?

And polling really shows — I mean, this is obviously a bit of an exaggeration— but it is not too much of an exaggeration to say that if you take a newspaper page and you put the word “politician” and the word “$10,000” on the page, people will think corruption. It doesn’t matter where the two words appear on the page. People are naturally suspicious of their politicians. That is not a bad thing, either. Our country was founded on people being suspicious of government, suspicious of politicians. But it may become a bad thing when we allow ourselves to think that it is abnormal, that we ought to love our politicians and trust everything they say and (to think) that … if we only gave them the authority to regulate campaigns for office, all of a sudden for that brief period they would become angels and they would pass nice, fair legislation that would keep them from being corrupt again in the future.

You know, I think the Founders’ idea — my idea — is quite the opposite. It is that you don’t trust these guys to rig the election system. I think most systems of tax financing of campaigns, in fact, tend to protect incumbents. They tend to be used if your one party has a majority to pass, then they can be used to disadvantage the other party. And again they tend to intimidate speech of other people.

Kokai: Do you get the sense that some of the people who support this idea, they just don’t like seeing all of these campaign ads and say, “Oh, you know, if we had the government paying for this” — not thinking that it is us paying for it through our tax dollars — “that we just wouldn’t see all of these wacky campaign ads, and we could be done with it”?

Smith: I think that is definitely true. Certainly that is one of the appeals they make to average citizens. Many of them don’t like seeing a lot of ads. And it is kind of interesting because under the First Amendment you can’t try to restrict the amount of political speech. When this is kind of pointed out or when the reformers are pressed on the issue, they say, “Oh no, we are not trying to limit speech. We are not trying to limit the amount spent. We just want to get the corrupt special interests out of it.” And yet almost immediately after that they go back to complaining about the total amounts of money that are spent.

In fact, we really don’t spend very much money on politics … based on what we spend for yogurt or potato chips or, you know, buying (or) renting videos. It is not very much money compared to many other countries. As a percentage of GDP, it is not that much money. We are not one of the pikers. I mean, we spend pretty well, but it costs money to communicate. This is a big country, and it is those communications that … educate people about campaigns and elections. It is communications that pay to drive voters to the polls, to register voters. This is how people learn of political information. Now there is another way you can do it, I suppose, which is just trust that the, you know, media will always do a perfect job in getting all the information out and candidates don’t need to campaign on their own. But, again, I am not sure that is necessarily the scheme that would work best for us.

Kokai: What are some of the negative consequences of this taxpayer funding of elections that the average person just doesn’t think about?

Beyond that, these systems do cost real money in the great scheme of North Carolina’s budget. It is not a lot of money compared to the highway budget or the budget to run the state’s universities or something. But it is real money. It does count, and it does take away from other government priorities. You have to say, “Is this a priority we want?” When people are willing to fund these campaigns privately, voluntarily, why should we be spending tax dollars on it?

Many of the programs have been found to have anti-competitive effects over time. I think that generally they create a web of regulation that slowly distances voters from campaigns. Campaigning becomes more and more complex. Things that people used to do, you can no longer do. You can no longer just get together with a bunch of neighbors, print up some yard signs or some leaflets or start an e-mail list and start campaigning. That violates the law. You can no longer just have the candidate drop by your house and have a little coffee klatch and pass the hat. All these laws help to professionalize politics. They reward those who can hire the best lawyers, the best accountants, the best consultants. So I think they have negative effects in a lot of ways.

The flipside is I think there is almost no evidence that they accomplish any of the goals that are set for them. … I’ll just put it this way. It is a different law, but people think about the McCain-Feingold Law, the last big federal campaign finance reform law. Well, the era of McCain-Feingold is the era of Jack Abramoff. It is the era of William Jefferson and the $90,000 cash or whatever it was stuck in his congressional office refrigerator. It is the era of Bob Ney and Duke Cunningham going to jail. Campaign finance laws are very ineffective at this. … I don’t think most people feel that campaigns have been made better or shorter or cleaner or that government is better. So it is something of a fool’s gold, if you ask me, that distracts us from some of the real issues about ethics and government and the real substantive issues about the state budget, for example.

Kokai: I suspect that most people who support this think that if we have these voter-owned or taxpayer-funded elections, that you are going to end up with better people in office. What do we actually end up with?

Smith: Well, I think they do think that because I do think they are sincere. Otherwise, they wouldn’t support it. But you know studies in the two states that have had these elections for a decade — Arizona and Maine — have not shown much change. They have not shown much change in the type of people in the legislature, except for there are fewer women. They have not shown much change in the way those legislators behave once they are elected. You know, Republicans still vote pro-business. Democrats still vote pro-labor. … These things aren’t that hard. They are shaped by things other than contributions. So I think in the end people who think that this is going to make major changes in government are just setting themselves up for disappointment.