A redistricting picture worth more than most words written about it

Not all pictures are worth a thousand words. But the picture of North Carolina’s new congressional map tells an important story. It’s a story worth more than most words generated in ongoing legal disputes about the map.

It’s a story that should make it hard for a reasonable person to conclude that lawmakers engaged in any “extreme” behavior when drawing the map. It’s a story that ought to prompt second thoughts among those who dispute Monday’s court ruling upholding the map. 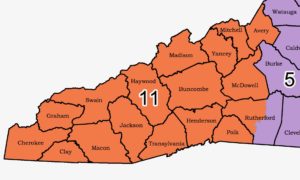 Let’s remind ourselves of the task the General Assembly set out to complete when drawing the new map last month.

In September a national activist group aligned with the Democratic Party filed suit against the congressional map used since 2016. While not officially throwing out that map, a three-judge state Superior Court panel suggested on Oct. 28 that lawmakers ought to consider drawing a new map. The judges warned that the 2016 map likely violated the state constitution because of “extreme” partisan gerrymandering.

The judges reminded legislators that candidate filing for congressional elections was scheduled to start in December. And the judges hinted that they liked the open, transparent process the General Assembly had used to redraw state House and Senate maps in response to a separate lawsuit. 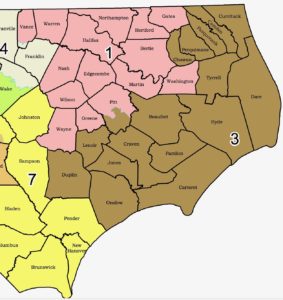 So lawmakers took the judges’ advice. They drafted a new map. They used an open process including live video and audio streams of all mapmaking. They took the final vote on the new map Nov. 15, less than three weeks after the court issued its warning. The final product split North Carolina into 13 congressional districts. Thanks to precedents set in previous court rulings, each district had an equal population based on 2010 census data.

Critics quickly pounced on the final product as another example of “extreme” partisan gerrymandering favoring Republicans. But the actual map — the picture — tells a different story.

The map reminds us, first of all, that North Carolina is no Colorado, Wyoming, or even Alabama. It doesn’t have simple, straight border lines. Other than a flat northern boundary that extends roughly two-thirds of the way across the state, our borders are irregular. Other than a handful of counties in the north central part of the state, county shapes are no more uniform or aesthetically pleasing. 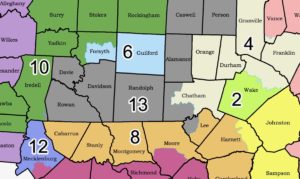 Only Mecklenburg and Wake counties have large enough populations for their own congressional districts. The Triad is the only other region that can limit a district to just two counties.

To the extent that lawmakers wanted to avoid splitting counties, they were bound to come up with new congressional districts featuring unusual shapes. That outcome was unavoidable.

Only two counties — Mecklenburg and Wake — have populations large enough to justify a self-contained congressional district. The new map has them. The new 2nd District sits in Wake County alone, while a modified version of the 12th District occupies much of Mecklenburg. In only one other case — the Triad — do adjoining counties have enough population to limit a district to just two counties. Lawmakers took enough population from Forsyth to combine with all of Guilford County for a new 6th District.

In all other instances, the need to form districts of an exactly equal population forced mapmakers to string together multiple counties. 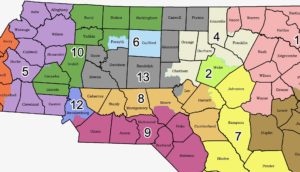 In most cases, mapmakers had to choose whether to string counties together from north to south, from east to west, or in some combination.

It would have been nearly impossible to find a more compact way to group far-western N.C. counties. On the other side of the state, the coastline offered some help in grouping eastern counties.

In other cases, legislators had to choose whether to group counties north to south or east to west. Either choice has its trade-offs.

For instance, the new 5th District stretches from Virginia to the South Carolina line. But that’s in a part of the state where that distance is relatively compact. Trying to stick with the north-to-south orientation would have become more problematic further to the east, especially just east of the Triangle. At one spot, the line from Vance to Brunswick stretches through eight counties.

It’s easy to quibble, as some critics have, that lawmakers should have grouped counties together in different ways. But nothing about the picture itself — the actual map — screams “extreme” monkey business. Roughly 88 of the state’s 100 counties sit in a single congressional district. No county sits in more than two districts.

In most cases, the splits involve moving a sliver of one county to another group of counties to equalize district populations. There’s no “snake” district like the old 12th District. That district, a product of Democratic mapmaking in the 1990s, cobbled together small slivers of multiple counties along the Interstate 85 corridor. Courts allowed that district to stand in one form or another for more than two decades. Never was it declared too “extreme” to survive judicial review.

Nothing within the new map comes even close to rivaling that product of mapmaking malfeasance.

In fact, a reasonable person with no knowledge of the state’s partisan political makeup is unlikely to spot any egregious example of diabolical district lines. And that should be the real goal, according to reformers like Charles Blahous, senior research strategist at the Mercatus Center at George Mason University.

This summer, before N.C. lawmakers redrew any district lines, Blahous argued that redistricting reformers should move away from focusing on partisan outcomes. “Clearly, the foundation idea of geographical districting is that people who share a constituency ought to live reasonably close to one another,” Blahous said. “To the extent that gerrymandering really warps and distorts the shapes of congressional districts, it’s departing from that principle.”

“You often see instances where there is a common-sense understanding of things from the person on the street, but when the political class gets hold of an issue, it twists it beyond all recognition,” Blahous added. “I think most people, when they look at a map and they see districts twisting this way and that in all sorts of crazy ways, that offends their sense of how districting is supposed to be done.”

Pundits and politicians have spoken and written plenty of words about the new congressional map. Will it give Democrats a better shot at winning more seats? Did Republicans replace one “extreme” partisan gerrymander with another? What standard should judges use to decide whether the map complies with the state constitution?

Words are important. But let’s not forget the picture. The map itself tells a story. It shows no evidence of the mapmaking mischief that self-interested Democratic partisans want us to see.