No. 114: Economic Sentiments: Was Adam Smith a Liberal? 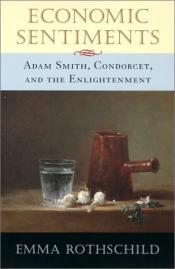 There is a burgeoning movement afoot to redefine Adam Smith as a “liberal” of the contemporary, progressive sort, rather than as the icon of classical liberalism he is standardly taken to be. It has never been a secret that Smith was not an anarchist, nor even, probably, a monarchist.
He argued that the government should undertake principally three tasks: defense against foreign invaders, i.e., an army; defense against domestic invaders, i.e., police and courts; and public works, i.e., those things from which everyone would benefit but from which no private investors would profit enough to seek to provide. This last task, in particular, is the edge of the proverbial wedge: left-leaning scholars who would like to knock Smith off his pedestal in the classical liberal pantheon have argued that this criterion licenses, indeed, requires, a great deal more active government action than those Reaganites who wore Adam Smith ties in the 1980s would care to admit.
Emma Rothschild’s Economic Sentiments: Adam Smith, Condorcet, and the Enlightenment is the latest salvo in the battle to redefine Smith. Her book is an investigation into economic and political writings of the late 18th century, and, whatever else one might say about it, it is full of interesting and little-known facts and quotations, and analyzes texts in novel ways.
But there is more to say about it. Although one cannot adequately address its wide-ranging discussions in a short review, two of Rothschild’s central themes are of particular interest for Ideas on Liberty readers and people who, like me, want to understand Smith.
Rothschild’s first claim is that Smith intended his famous “invisible hand” remark in the Wealth of Nations as nothing more than a “mildly ironic joke.” The second is that Smith was not as committed to laissez-faire as has been thought.
Rothschild begins by pointing out that Smith uses the phrase “invisible hand” only once in theWealth of Nations’ more than 1,000 pages, from which she concludes that it is unlikely he meant it to be the conceptual centerpiece of the book. In the other two places in his extant writings where it appears, once in his earlier Theory of Moral Sentiments and once in his posthumously published essay History of Astronomy, Smith neither seems to use the phrase in the same way nor does he seem to make much of its philosophical content.
Finally, she shows that Smith’s contemporary and near-contemporary readers did not center on that idea as the most significant of Smith’s work. In fact, it took almost a century before people started claiming that the invisible hand was one of, if not the, most important ideas in the Wealth of Nations.
Rothschild’s argument is interesting and provocative, but in the end it is unpersuasive. The principal reason her argument fails is that one could grant each of her claims and they would still not contravene the crucial fact that the idea of an invisible hand, if not the phrase itself, pervades Smith’s argument in the Wealth of Nations.
Over and over again throughout the book Smith makes reference to and relies in his argument on the claim that people acting only on their local, often self-interested intentions can unwittingly give rise to a larger system that benefits both themselves and others. I would argue that without exaggeration the invisible hand is perhaps the central notion in Smith’s book. Why else does Smith advocate free trade, the removal of government intervention in the market, protection of private property, and the abolition of state-granted privileges like monopolies? In each case they provide individuals the opportunities to satisfy their fundamental desire to “better their own condition,” which, in the doing, makes everyone, not just the individuals, better off.
The importance of the invisible hand notion for Smith’s argument also goes some way toward explaining why Rothschild overstates her other claim, namely, that Smith is less inclined towards laissez-faire than was previously thought. It is true, as Rothschild reminds us, that Smith recommended state subsidy of public schools (though it should be noted that he argued they must be only partially state-funded, that competition was still necessary, and that they should cover only the elementary years). And it is also true that Smith was quite concerned with both the material and the psychological well-being of the average, often relatively poor laborer. Like Turgot, Rothschild argues, Smith wanted the government to take positive action to help the condition of the poor.
Those two things are not inconsistent. As is increasingly clear to us today, and was already clear to Smith in 1776, free markets are not incompatible with concern for the poor. As Smith saw, free markets are essential to making the poor better off. That’s why he endorsed them. It’s a silly caricature of Smith, as well as of contemporary free marketeers, that they’re indifferent to the poor.
Rothschild’s book is interesting for its extensive information about thinkers such as Condorcet and Turgot, and about the political and intellectual climates of the time. But in the end, her understanding of Smith, as well as of free-market economics, leaves something to be desired.