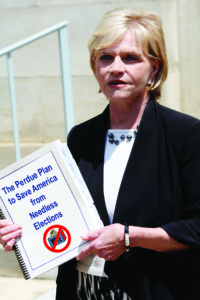 Former Gov. Beverly Perdue, a Democrat, has been working privately with members of the state’s Republican General Assembly majority to cancel the 2016 elections, Carolina Journal has learned.

It’s a revival of an idea Perdue first mentioned four years ago, as her single term as governor wound down.

“I got a lot of grief when I suggested we cancel the congressional elections in 2012,” Perdue told CJ, citing an answer she gave in September 2011 to a question about reviving the economy. “Maybe I was just ahead of the curve.”

Perdue drew scorn locally — along with jabs from late-night talk-show hosts — when she said, “I think we ought to suspend, perhaps, elections for Congress for two years and just tell them we won’t hold it against them, whatever decisions they make, to just let them help this country recover. I really hope that someone can agree with me on that. You want people who don’t worry about the next election.”

The 2012 elections ended up moving forward without Perdue, who became the first N.C. chief executive to decline to run for a second term since that option became available in 1980.

Canceling elections makes even more sense today than it did four years ago, Perdue said. “I mean, look at how crazy the situation is right now.”

“You’ve got a likely presidential race between the two most loathed candidates in memory,” Perdue explained. “You’ve got a governor’s race with the ‘change’ candidate being a guy who’s spent 30 years in the political establishment. Heck, we even have a General Assembly with a Senate that votes unanimously in favor of a tax cut and a House in which overwhelming majorities of both parties vote for the budget plan. What the heck is going on?”

Perdue is particularly perplexed about her fellow Democrats’ approach today toward the state sales tax.

“I wish I would have known in 2012 that Dems were going to speak out against expanding the sales tax,” she said. “Back then, we Democrats wanted higher sales taxes. It was the Republicans who wanted lower rates. For crying out loud, that was the whole reason I vetoed the budget two years in a row.”

“We need a break from elections so we can get our ducks in a row,” Perdue added. “Are we going to be the party of unsustainable higher spending and higher taxes, or are we going to move in another direction? We need some time to figure that out.”

Perdue has been trying to line up additional high-profile support for her election cancellation plan. “Roy Cooper seems to be doing pretty well in fundraising and in the polls, but I don’t know that he’s figured out that being governor involves actual work,” she said. “I’ve been telling him he can’t just roll out crime stats once a year and say ‘no comment’ the rest of the time. He’d be better off sticking to his gig as attorney general.”

“And Kay Hagan said she’d go along with me, but only if the plan included a retroactive cancellation of the 2014 U.S. Senate race” which Hagan lost to Republican Thom Tillis, Perdue said.

Parting Shot is a parody loosely based on events in the news. This parody appeared in the June 2016 print edition of Carolina Journal.