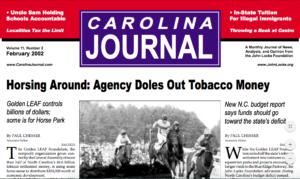 • North Carolina faces a potential $900 million budget deficit this year, but the organization authorized to distribute billions in tobacco settlement money is giving $200,000 to a horse park. Should the legislature pull the reins? Page 1

•The Center for Local Innovation, in its annual By the Numbers report, discovers that Charlotte and Wilmington still like to tax a lot. Page 4
• The American Association of Motor Vehicle Administrators recommends enhancements to improve security when issuing driver’s licenses. Page 5

• Under the federal education bill signed by President Bush on Jan. 8, new accountability standards are expected to have a minimal effect in North Carolina. Page 6
• A new report on early childhood education leads the media to swoon over North Carolina’s apparent successes, but the study never measured whether children are actually learning. Page 7
• Lindalyn Kakedelis writes that improving standards, assessments, and proficiency will ensure the state’s children are receiving a world-class education. Page 7
• The State Board of Education decided in December to recommend the General Assembly expand the state’s number of charter schools to 110. Page 8

• A proposed North Carolina bill would allow illegal immigrants to pay in-state tuition to attend universities. Page 10
• A study by the Pope Center for Higher Education Policy found that UNC-Chapel Hill received the third-highest percentage salary increase in faculty salaries over the last nine years. Page 10
• Students at North Carolina’s universities were generally mute as school officials discussed raising their tuition — again. Page 11
• Editorial intern Rheta Burton, in her senior year at UNC-Chapel Hill, writes that she will miss a lot, but not all the “left wing fanatics” who demand their voices to be heard. Page 11
• A poll of Ivy League professors found that all the talk coming from their universities about “diversity” doesn’t extend to politics. Page 12
• A report by the Lumina Foundation on college accessibility for the poor, places the responsibility on “society.” Page 13

• Reviews of Cuba in Revolution by Miguel A. Faria, Jr., and two books about the late Jim Valvano, former basketball coach at North Carolina State. Page 18
• A film review of “Lord of the Rings:The Fellowship of the Ring,” and a review of the book When in the Course of Human Events:The Case for Southern Secession by Charles Adams. Page 19

• Editorials on the Triangle Transit Authority and the state’s indebtedness for prison financing. Page 20
• Editorials on the potential for a President John Edwards, and the endangerment of trees. Page 21
• Michael Walden says the federal government should let localities be responsible for roads in their borders. Page 23

• The state unleashes almost every force imaginable, including a tax czar, bounty hunters, and smart bombs, to put an end to “tax terrorists.” Page 24