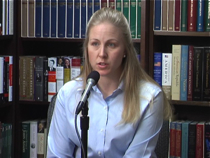 Gov. Pat McCrory and state lawmakers have begun the process of putting together North Carolina’s General Fund operating budget. As the debate begins on determining the state’s sources of revenue and spending priorities, the John Locke Foundation is crafting an alternative General Fund budget grounded in providing core services, taking care of the vulnerable, and allowing North Carolinians to prosper from the fruits of their labor. Sarah Curry, the Locke Foundation’s director of fiscal policy studies, discusses key components of the plan and why the document should be guided in this way. Then we turn to debate over the power of local governments. Some North Carolina lawmakers want to limit cities’ ability to control aesthetic design standards in new home construction. Home builders and Realtors are supporting a proposal to restrict local regulation of home designs. You’ll hear highlights from a recent legislative debate on the topic. Next is a look at education reform. Teacher tenure would disappear from North Carolina public schools under a proposal N.C. Senate Republicans have proposed. Senate President Pro Tem Phil Berger, R-Rockingham, recently explained why he and his colleages say one- to four-year contracts would be better for students than the current tenure system, also known as “career status.” That’s followed by a look at labor law. North Carolina is a “right-to-work” state because of its law restricting union activity. Walter Wessels, professor of economics at N.C. State University, has studied the impact of a state’s right-to-work status on both employment and economic growth. He shares details from his research. And finally, John Locke Foundation President John Hood offers recommendations for putting North Carolina’s transportation system back on track after years of misguided spending and priorities. Hood discusses the issue as the Locke Foundation releases a new transportation study led by Dr. David Hartgen, professor emeritus at UNC-Charlotte.