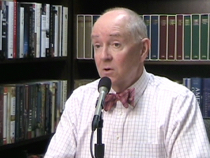 A 9-year-old legal battle between two North Carolinians and the state of North Carolina came to an end in late April. The story, reported on by Carolina Journal beginning in 2011, end not only with a personal victory for the Hurst family but with a victory for those who believe the effort by the Perdue administration to obtain property without paying for it was an un unfair wielding of government power. Carolina Journal Managing Editor Rick Henderson provides the details of the legal wrangling that has ended with compensation for the family approved by the McCrory administration.  Then we look at North Carolina’s legal statutes. An analysis shows our state has far more crimes in its law books than surrounding states. Two Manhattan Institute scholars say many of these crimes involve small business owners who fail to comply with overly complicated rules and regulations. Jim Copland and Isaac Gorodetski of MI’s Center for Legal Policy discuss problems associated with overcriminalization in the Old North State. Next we turn to politics. As we know, American politics is polarized. Is there less common ground among competing political philosophies now than in the past? It’s a question that drove a recent Duke University debate featuring former George W. Bush speechwriter Michael Gerson and Washington Post columnist E.J. Dionne. You’ll hear highlights from their remarks. That’s followed by comments from leaders of Americans for Prosperity. The free-market activist group often gets accused of saying “no” to every government proposal. In response, AFP recently unveiled its positive agenda for boosting job growth in the state. State director Donald Bryson and AFP president Tim Phillips offered details during a recent news conference outside the State Capitol. And finally, we update efforts by some state legislators to scale back the state’s antiquated law called Certificate of Need. John Locke Foundation Health and Human Services Policy Analyst Katherine Restrepo explains that the law – essentially a permission slip from the state that is required to open or expand many facilities and services – is an unfair barrier to entry. In the process, Restrepo says, consumers are denied choice and lower costs.