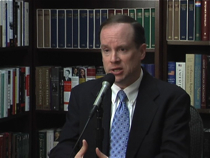 This year’s legislative victories on behalf of tax reform, education choice, and limited government harken back to key voices in the conservative movement, according to John Locke Foundation President John Hood. He explains what legislators have accomplished and how the actions relate to Ronald Reagan, Barry Goldwater, and Milton Friedman. Next is an in-depth look at the debate over targeted tax incentives. During a recent legislative meeting, N.C. Commerce Secretary Sharon Decker told Sen. Gene McLaurin, D-Richmond, that North Carolina needs targeted tax incentives to seal some major economic development deals. You’ll hear highlights from their exchange, along with a response from incentives critic Roy Cordato, the John Locke Foundation’s Vice President for Research and Resident Scholar. Then we turn to education policy. Legislative staffers recently traveled to Douglas County, Colo., to learn how that community approaches a range of school choice options. As they presented their findings, Senate Democratic Leader Martin Nesbitt questioned the trip. You’ll hear his comments and a response from Sen. Fletcher Hartsell, R-Cabarrus. That’s followed by a look at free-market capitalism, which has faced attacks in some quarters since the onset of the Great Recession. But the Rev. Robert Sirico, president of the Acton Institute, recently explained for a Campbell University audience that defenders of free markets have strong arguments on their side. And finally, we delve into total state spending, which has grown over the past few years. Much of the spending has escaped media scrutiny and public debate because it is outside the General Fund operating budget. Sarah Curry, the John Locke Foundation’s director of fiscal policy studies, explains where all the money is coming from, how it is being spent, and why legislators should be more transparent about a huge chunk of funding.