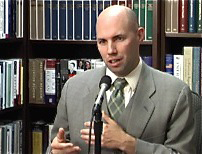 If you’ve ever tried to access online the public documents of a state agency, school system, city, or county, you’ve probably had mixed results and spent a good deal of time. That’s why the John Locke Foundation created www.nctransparency.com as part of its push for more open and transparent government. Since the site’s debut – and the assignment of grades to governments – Coletti has heard from various elected leaders. Some have heeded the call for more transparency. Others have questioned the grade they received. In this interview, Coletti discusses the esponses he’s received and reminds North Carolinians of how they can use the site to better understand what their leaders are doing with taxpayer money. Next, we hear from one of the most renowned entrepreneurs in America about capitalism, which has taken a bad rap since the financial crisis struck the United States late in the Bush administration’s second term. Steve Forbes, chairman, CEO, and editor-in-chief of Forbes Media, says that bad rap is undeserved. He’s co-written a new book titled “How Capitalism Will Save Us.” He explains how capitalism is the best possible system for ensuring prosperity that benefits all people. Then we turn to the views of another high-profile industry executive about financial deregulation. John Allison, chairman and retired CEO of BB&T, disagrees with pundits who blame “unfettered markets” for our current economic woes. In a recent presentation, Allison blamed the financial crisis on “a combination of altruism and pragmatism.” You’ll hear his explanation. That’s followed by a look at some of the resources available to parents who choose home-schooling over public education. Leigh Bortins, founder and CEO of Classical Conversations, explains how her educational services company helps parents who prefer a “home-centered” education. And finally, can parents trust that their child’s public school values parent input and is friendly to inquiries and involvement? For the second year, John Locke Foundation education policy analyst Terry Stoops provides parents and taxpayers with a tool to help answer that question. Stoops discusses his analysis and report about parent-friendly schools in our state. This year, North Carolina school districts earned more “C” grades and fewer “D” grades.