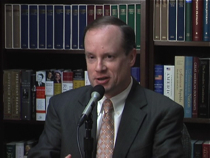 Policy reforms enacted this legislative session by the Republicans who control the General Assembly have drawn sharp criticism from Democrats and groups allied with them. And now the New York Times editorial board has joined the chorus. John Locke Foundation President John Hood weighs in on the critics and explains key reforms of the session. Next is a look at progress toward regulatory reform. While other issues generated more headlines, state lawmakers took significant steps during the closing days of the 2013 legislative session to reduce North Carolina’s regulatory burden. You’ll hear highlights from a committee debate over the latest regulatory reform legislation. Then we turn a look at the first six months in office of North Carolina’s first Republican governor in two decades. Pat Mccrory recently marked the milestone by delivering a progress report on key accomplishments during that opening period in his new administration, highlighting achievements in education and transportation. That’s followed by a look at redistricting, now that a three-judge panel has ruled that North Carolina’s new election maps are constitutionally sound. The N.C. Coalition for Lobbying and Government Reform says that ruling does nothing to reduce the need to reform the map-making process. Coalition director Jane Pinsky explains why her group continues to push for redistricting reform. And finally, they were once the rage on North Carolina college campuses, but Jane Shaw of the Pope Center for Higher Education Policy explains that summer reading programs are waning. Shaw looks back at the programs and offers recommendations for a classics-based reading program that could serve to better prepare college freshmen for the rigors of university-level work.