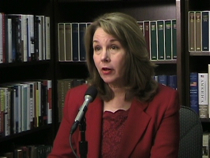 The General Assembly won’t start its 2015 session in earnest for a few days, but very soon, members will get together for a short organizational meeting. It’s just the beginning of what is shaping up as a fascinating session, according to John Locke Foundation Vice President for Outreach, Becki Gray. She discusses the steps lawmakers will take to choose leaders, as well as key issues and decisions. One of those key issues is health care. North Carolina could take a major step toward health care reform by scrapping or scaling back its certificate-of-need restrictions. Dr. Richard Bruch, orthopedic surgeon and past president of the N.C. Medical Society, explains why the CON process gets in the way of health care innovation.  Then we look at an often overlooked issue that faces government officials. State government collects a vast amount of data. John Correllus, director of the Government Data Analytics Center, recently explained to state lawmakers how his center is trying to ensure that data is used more efficiently. That’s followed by another view on the issue of health care reform. While free-market advocates tend to support the notion of CON reform, not all conservatives are on board with the idea. Cody Hand, former top aide to Republican state Senate leader Phil Berger, is now vice president and deputy general counsel of the N.C. Hospital Association. Hand defends CON rules as a necessary defense against other government restrictions on health care. And finally, Roy Cordato, vice president for research for the John Locke Foundation, refutes minimum wage myths that continue to proliferate despite economic data that shows mandatory increases in minimum wage without corresponding increases in productivity end up hurting many of the low-skilled workers they are designed to help.