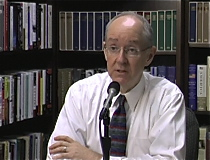 The same-sex marriage debate has landed in North Carolina and state legislators have approved an amendment to the state constitution that would defend traditional marriage by defining it strictly as between one man and one woman. Carolina Journal Managing Editor Rick Henderson explains the amendment and the politics behind the scenes, as well as several amendments that didn’t make it out of both chambers and onto the ballot during the legislative session. Next we turn to North Carolina’s struggling economy. Our state might not be headed toward a second official recession, but the sluggish economic growth that’s plagued the state in recent months is likely to continue in the near future. That’s the conclusion N.C. State University economist Michael Walden reaches from his latest examination of leading state economic indicators. Walden discusses his findings and the types of changes that would help the North Carolina economy rebound. Then we turn to the heated debate among advocates over a constitutional amendment that, following a legislative vote, will appear on the May 2012 ballot and define marriage as the union of one man and one woman. Debate over that amendment involved more than just legislators themselves. You’ll hear highlights from dueling news conferences discussing the pros and cons of adding a marriage amendment to the state’s governing document. That’s followed by a look at the fight against terrorism. In the 10 years since the 9/11 terrorist attacks on New York City and Washington, the United States has been free of major terrorist incidents. Juan Zarate, deputy national security adviser for combating terrorism from 2005 to 2009, recently discussed the national response to 9/11 during a public presentation at Duke University. He also offered his thoughts about our current safety level and the Obama administration’s anti-terrorism policies in an exclusive interview with Carolina Journal Radio. And finally, President Obama has decided to delay implantation of an EPA regulation that would tighten air quality standards and cost roughly $90 billion to implement. John Locke Foundation Vice President for Research Roy Cordato explains the costs involved and questions why the president would ever implement this rule since he acknowledges the spectacular costs to business and the economy.