The Obamacare Threat To New and Existing Jobs 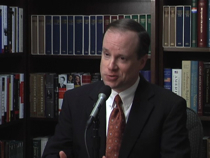 The latest survey of chief financial officers conducted by Duke University and CFO Magazine has stunned media and analysts alike by what it reveals about the potential for ObamaCare to have a devastating impact on new and existing jobs. John Locke Foundation President John Hood delves into the data and explains why high-level business people are recoiling to the law’s costly mandate. Then we turn to a key reform implemented last year by the Republican-led North Carolina General Assembly. Because of the reform, North Carolinians face major changes in the way they’ll pay state income taxes for 2014. Legislative staffer Cindy Avrette recently reviewed those changes for state lawmakers. You’ll hear highlights from Avrette’s presentation, along with reaction from one of the chief architects of state tax reform, Sen. Bob Rucho, R-Mecklenburg. Next is a look at developments in K-12 education. North Carolina legislators have lifted a cap on public charter schools, created new opportunity scholarships, ended teacher tenure, and enacted other education reforms in the past few years. And they continue to look for ways to improve public education. Rep. Craig Horn, R-Union, recently discussed the priorities of a special committee studying education innovation. That’s followed by concerns expressed by some over the state’s budget for its court system. As state lawmakers pursue ways to improve the efficiency of that system, the director of the Administrative Office of the Courts is warning them about the impact of recent budget cuts. Former Judge John Smith discussed the courts’ budget challenges during a recent legislative committee meeting. You’ll hear his comments, along with responses from top legislators. And finally, Terry Stoops, the John Locke Foundation’s director of research and education studies, discusses the latest round of public charter school approvals from the state Board of Education and why the scope and size of the choice movement continues to grow.