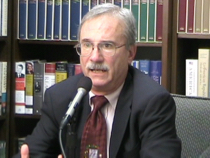 Critics said it couldn’t be done but that didn’t stop the John Locke Foundation from fighting for North Carolinians and proposing an overhaul of the state’s antiquated tax code. Reformers listened, and over the past four years, significant reforms have been implemented. Dr. Roy Cordato, the John Locke Foundation’s vice president for research, discusses the reforms made to date, including flattening and lower of rates, and he recommends more reforms as part of the mission to achieve a fair and neutral set of rates and rules. Cordato explains how a reduction in the capital gains tax, an increase in the child tax credit, and a change in how business assets are handled would fit into the reform package. Then we continue with a discussion of the economy. The American economy has been coping with sluggish growth ever since emerging from the Great Recession. Economist John Taylor of the Hoover Institution and Stanford University says policymakers can help spur stronger growth by focusing on basic economic principles: predictable policies, rule of law, reliance on markets, and limited government. Taylor explained the value of those principles during a recent visit to North Carolina. Next is a look at brewing policy debate over transportation. Some state lawmakers continue to fight planned toll lanes on Interstate 77 north of Charlotte. Sen. Jeff Tarte, R-Mecklenburg, summarized his colleagues’ concerns about the toll project during a recent news conference. That’s followed by comments from an education advocate Brenda Berg. We know that North Carolina businesses depend on a skilled work force. That’s a key reason why business groups are backing an education-focused group called BEST NC. President and CEO Brenda Berg explains BEST NC’s goals and the group’s work to improve the state’s public schools. And finally, we look North Carolina’s growing school choice option of virtual schools. Three are now operating: one traditional public school and two public charter schools. The John Locke Foundation’s Director of Educational Outreach, Lindalyn Kakadelis, explains what the schools offer, how they compete, and why online education is growing.