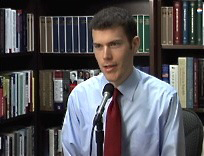 UNC-Chapel Hill is giving a facelift to a controversial program that is supposed to help North Carolina veterans and their families. The changes come in the wake of an internal review that found waste and abuse in the Citizen Soldier Support Program. Carolina Journal reporter David Bass has been on the story since the summer and, in this interview, discusses proposed changes and reviews the details of the review. Then we turn to the national political stage. As President Obama approaches the end of his first year in office, it’s not clear that the public supports much of his policy agenda. That’s the assessment from Fred Barnes, Fox News political analyst and executive editor of The Weekly Standard. Barnes dissects the Obama administration’s challenges and offers some ideas for the Republicans who hope to challenge him. Next, we delve into history and why it’s important to learn from the past. For example, the Fourth Crusade took place 800 years ago, but John Locke Foundation President John Hood says we still can learn some valuable lessons from that episode. Hood outlined those lessons in a recent presentation to the Locke Foundation’s Shaftesbury Society. You’ll hear highlights from that speech. That’s followed by a discussion of the impact and legacy of Ronald Reagan. He helped win the Cold War and presided over the start of a quarter century-long economic boom, but many people still don’t understand the role Reagan played in improving American society. Steven Hayward wants to correct the record. The American Enterprise Institute expert offers highlights from his new chronicle of the 40th president, The Age of Reagan. And finally, Carolina Journal managing editor Rick Henderson weighs in on the changing newspaper industry and talk in Washington of a taxpayer bailout for the industry. Henderson explains why he is adamantly opposed to the idea and why he is particularly concerned about who will fill the role of government watchdog if newspapers are joined at the hip with government via taxpayer funding.