A new year often brings a desire for change. For all the failed resolutions, somebody out there, many even, will alter their lives for the better. We are constantly changing as a society. Fashion, music, cost of living, it’s all changing. How many people born just a half-century ago could have foreseen today’s technological advances?

Still, some of our most enduring truths remain unchanged. Nowhere is this more evident today than the follies of centralized power and the regulatory state.

The quagmire at the federal level in managing a pandemic caused an exacerbated President Biden to declare, “Look, there is no federal solution.” This statement emerged a year after promising to “shut down the virus” on the campaign trail.

At the state level, ignoring input from the Council of State, Gov. Roy Cooper’s dictatorial decrees unnecessarily closed businesses and schools, upending the future livelihood of millions of North Carolinians. Even Cooper is now conceding we must live with the virus beyond endlessly managing it by government whim.

While many orders are well-intentioned, it remains unclear if mask mandates and lockdowns do much of anything to protect the citizenry. This hard truth is combined with the economic devastation of job loss and the unintended health consequences from social isolation or debilitating fear.

Many politicians eschewed their edicts when they no longer complied with the very orders they discharged. Quite a few fled to Florida for a vacation to bask in a free state while publicly denouncing the very openness they prefer.

A centralized and distant bureaucracy proves to be one of the worst forms of tyranny. In designing our government, the American founders understood this enduring truth. They wanted to create a workable federal arm that is restrained by the separation of powers and principles of federalism. “The powers delegated by the proposed Constitution to the federal government are few and defined,” declared James Madison. 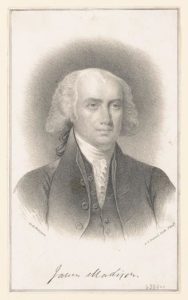 Courtesy of the Library of Congress.

State government relies on the separation of powers principle, too. Unfortunately, in North Carolina, the legislature’s power has been eroded by activist courts, even going so far as to overturn constitutional amendments affirmed by the voters.

More critical is the oddity of many who clamor for more centralized power despite obvious government failures, particularly during a crisis. Imagine still thinking that we need to spend more federal dollars despite a debt that will soon surpass $30 trillion? Federal spending and debt are causing inflation, and, especially for poorer Americans, that creates a more meager existence.

Yet, those who oppose federal expansion and new spending programs are constantly painted as villains by spendthrift advocates in the government and media. If one is willing to pile on more debt, they’re often perceived as forward-thinking and heroic.

When the government strays into areas it’s not designed to operate, we’ve increasingly witnessed the chaos that ensues. Furthermore, areas of society that are specifically enumerated for federal power in the Constitution become neglected or broken down. Recent examples include the border crisis or the debacle in Afghanistan. Of course, our atrocious debt that is punishing the livelihood and freedom of Americans might be the most alarming negligence of all.

Hopefully, schools are still teaching history in a way that reminds us of the dangers of centralized power. In the end, Americans must desire self-government for themselves. This is the enduring question we continually grapple with yet struggle to answer decisively. The alternative is ceding more and more power to centralized decision-makers and unelected bureaucrats. If that happens, it will guarantee plenty of change, but somebody else will get to dictate the change.